A Place to Dine 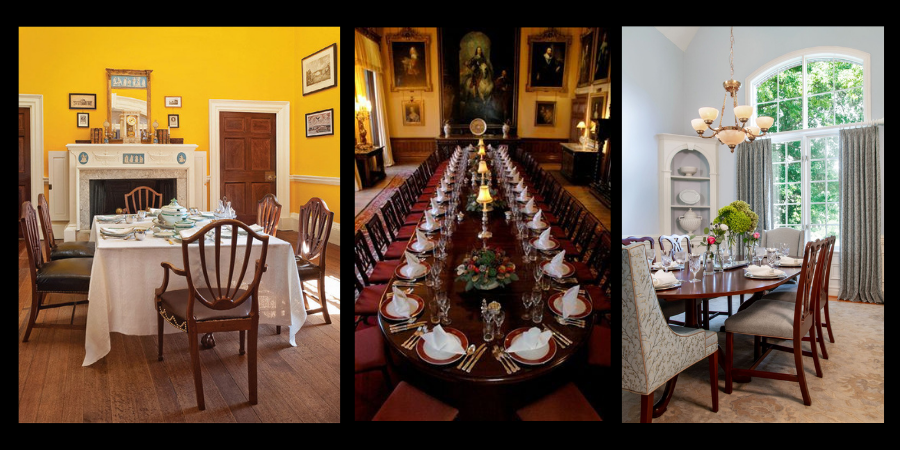 With holidays approaching, my thoughts turn to gatherings in dining rooms.  Growing up, I have many fond memories, photos and soundless home movies of large, extended-family meals on Thanksgiving, Christmas and Easter.  We even had the quintessential “kid’s table”!  (As the years went by, it got harder and harder to graduate to the “adult table” due to sheer numbers.)  This year, we may not be able to gather as we have in the past so I’m feeling nostalgic.

It is believed that the ancient Greeks and Romans were the first to create rooms for hosting meals.  During the male-only dinner parties, guests reclined on lounges with small side tables laid with food and drink.  This tradition continued for over 100 years!  (Think of the misogyny and gastric reflux!)

Finished in 1772, Thomas Jefferson’s Monticello is believed to be the first dining room (photo above left) seen in the United States.  Always ahead of his time, Jefferson built in a dumb waiter for wine and a revolving food service door.  After 5 years as Minister of France, he returned from Paris and brought European style and ideas home with him.  His dining room took on more importance as Jefferson entertained guests with meals that were half Virginian and half French cuisine.

Didn’t we enjoy the aristocratic Crawley’s grand dining experiences?  (photo above center)  The PBS series, set in Yorkshire, England between 1921-1926, showed the number of servants it takes to create and serve their daily formal meal while they leisurely dressed for dinner.  How different is your life?  Those differences have influenced how we view dining rooms a century later.

As new homes are built, the demand for a separate dining room is decreasing.  The trend toward a more casual lifestyle continues with open floor plans encompassing spaces for living along with preparing and consuming meals.  Baby Boomer clients report that their adult children have no interest in their traditional dining suite.  Casual dining furniture seems to be what Millennials want with transitional pub sets or trestle tables with benches selling well.

I still have clients that enjoy having a formal dining room.  (photo above right)  It is important to know how they plan to use the room: how many people do they want the table to seat, how will they serve the meal, how much stain-proofing is needed on fabrics, how much storage is needed and are there other uses for the room?  The answers help me design a room that works for them as a place to create memories for their friends and family.

In the second house my parents bought, we gained a dining room.  Grandma’s mahogany buffet, table and chairs furnished the space.  In addition to holidays and dinner parties, my mom would occasionally set the table with her china and have “Manners Night” so we could practice our etiquette.  The table was also used for homework, puzzles and games.  Years ago, my parents decided to purchase their own furniture and I happily received Grandma’s.  When I look for a new home, my wish list always includes a dining room because getting out the formal dinnerware, crystal and flowers is the start of a special event.  When I think of the fun in dining rooms, a favorite quote comes to mind.  It was heard in the movie Steel Magnolias and falsely attributed to Dorothy Parker but was originally spoken by Alice Roosevelt Longworth, “If you don’t have anything nice to say, come sit by me.”