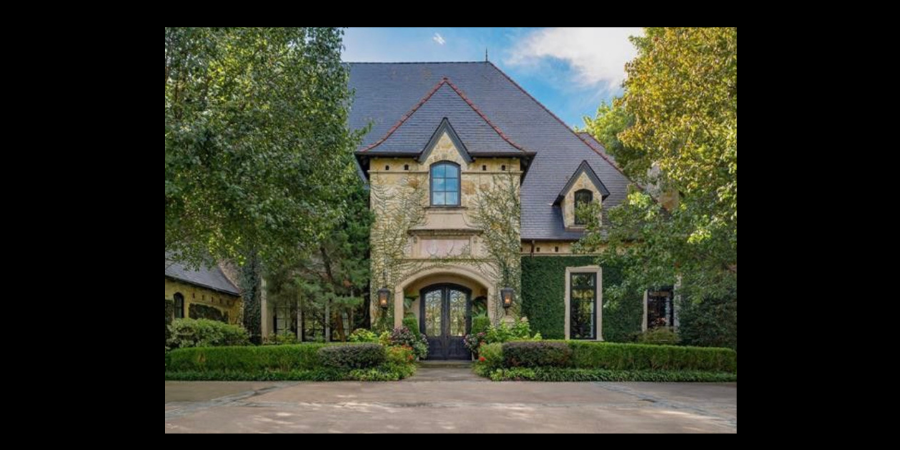 Eight miles north of downtown, this story and a half estate with over 11,000 square feet was chosen for the inaugural Dallas show house location.  Reminiscent of a villa in Provence, the exterior features ivy-covered natural stone, limestone accents, a steeply pitched slate roof and elegant pool area.  The house was built in 2003 with 18 rooms including 5 bedrooms and 8 baths.

Twenty-seven descriptively named spaces were completed by interior designers, architects and landscape architects from Texas, California, Oklahoma and North Carolina.  There are some consistent themes that were also on display in August’s Lake Forest Showhouse.

Get ready because you will be seeing more and more pattern and color!  Nearly every interior space had wallpaper or fabric covered walls and some ceilings.  A few applications were more subtle and textural, but most were patterned and colorful.

Several rooms featured lacquered walls and ceilings which means perfecting surfaces, applying several coats of paint and a urethane alkyd gloss.  Any defects are magnified by the glass-like shine so it’s a complex and time-consuming process.  (Read expensive.)  Lacquering was also seen on some furniture.  If you are willing to give it a go, I want to see after photos!

Designers want their show house spaces to reflect their best work and no detail was spared. Layered window treatments and rugs, tented beds, gorgeous lighting, interesting art, abundant accessories, a dash of animal prints, decorative trim and lots of monogramming defined the traditional looks.  Green seemed to be the favorite color, with some use of a newer, more olive tone.   Blue came in second with guest appearances from gold, lavender, red and eggplant.  Unlike other times, whatever color suits you seems to now be available in home furnishings.

Since Texas is known to be more traditional, only a handful of rooms displayed a modern or transitional style.  All were primarily shown in neutral colors of cream, brown, black and a little gray. Clean straight lines and smooth curves with lots of texture made the spaces inviting.

Global Influences and Beyond

The French Provincial feel did not stop at the exterior, however, other cultural styles were represented in many of the rooms: a Spanish screened porch named “La Matadora”, the Moroccan-inspired bedroom “Turkish Writer’s Lair”, “Casa Fiorentina” for the Italian living room and even a futuristic serving spot called “Bunny Mellon Collie and the Infinite Sadness Bar”.  Creativity everywhere!

With the temperate weather of Dallas, outdoor spaces can be enjoyed year-round.  No need to close pools if fountains keep water moving to prevent possible freezing.  Overlooking the pool area, a fireplace keeps the screened porch comfortable and a swinging bed is steps away from seating around a fire pit.

For photos and more info on spaces mentioned, go to @DesignerlyExperience on my Instagram feed or Beautiful Rooms LLC on Facebook.  Please share.  And, since it was such a large estate, there will be more posts for inspiration to come!